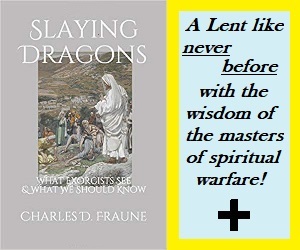 Please visit our website - www.TheRetreatBox.com - for great Catholic products for Christmas and other occasions.
Be sure to "Subscribe" and "Follow" us!
Click Here to buy the bestselling book --- Slaying Dragons: What Exorcists See & What We Should Know

NB:  The book now has the nihil obstat and is awaiting the Imprimatur.

The Second Edition of Slaying Dragons: What Exorcists See & What We Should Know brings many enhancements to the first edition, which had been released in March of 2019 and was available for several months before the revision process was initiated.

In addition to the numerous exorcists now cited, the Second Edition incorporates the wisdom of many of the great saints and Doctors of the Church, such as:

Of course, some of these saints are featured more extensively than others.  St. Thomas Aquinas, St. Louis de Montfort, and St. Alphonsus Liguori, for example, all enjoy a heavy presence in the book.

At the end of each Chapter there is also now a very helpful summary section.  The amount of important material in the book is so much that we realized there needed to be reminders and summaries to help the reader remember and easily return to all of the insightful teachings of the exorcists.

Finally, the book has now received the Nihil Obstat!  The imprimatur will be granted soon.  As noted below, the book has already been reviewed by several exorcists.

A Note on the First Edition v. the Second Edition

While the first edition was read and enjoyed by countless priests and laymen, the Second Edition has also been reviewed and supported by a few exorcists already.   About twelve more exorcist-reviews are expected before long.
Email Post