Skip to main content
Click Here to buy the bestselling book --- Slaying Dragons: What Exorcists See & What We Should Know
Spanish Edition now available! "Matando Dragones: Lo Que Los Exorcistas Ven y Lo Que Debemos Saber"
The Amazon Audible version now available! Use this link to access it and get your copy!
Be sure to "Subscribe" and "Follow" us!
Posted by Charles D. Fraune December 06, 2019 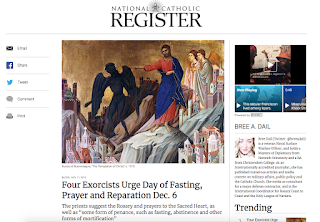 As everyone, hopefully, embraced the Day of Prayer, Fasting, and Reparation on December 6th, on the Feast of Saint Nicholas, the great defender of the Faith and the Council of Nicea, and on a First Friday dedicated to the Sacred Heart of Jesus, it is important to remember that what the exorcists were calling for that day is something we all need to be doing more often.

Our world is overrun with sin and many forms of idolatry.  Most Christians are in a state of constant compromise with evil and sin as a result of being immersed in a culture of secularism and materialism and practical atheism.  This, without intense spiritual resistance, threatens to erode the devotional life of the most dedicated followers of Christ.

The greater part of the world is drifting into a new religion in the practical sense:


a new morality, a new idolatry, a new anthropology, a new theology of life and death, all with a practical rejection of God and the supernatural.

In its place, a religion which can be described as "naturalism" has begun to coordinate all of these new philosophical perspectives.

What is most shocking is the participation of many who otherwise identify themselves as Catholics.  This, however, has been warned about by the popes in the late 19th and early 20th centuries.  Here, today, throughout the world, we are seeing it manifest more openly and unapologetically.  That is a grave threat to the spiritual well-being of souls. 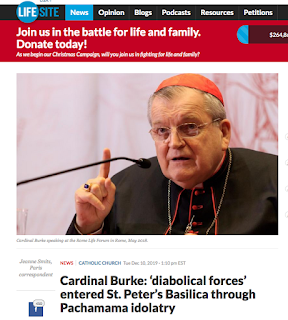 So, today, as we remember the call of these four exorcists, and prepare to heed the call of Cardinal Burke on the Feast of Our Lady of Guadalupe, let us take seriously not simply their warning about the recent events in Rome, but also the warnings contained in all of their teachings.

Exorcists, you could say, are aged more quickly than other priests, for they are compelled by their office to deal with, on a personal level, the malevolent spiritual beings we know as demons - head-on.  Their counsel is then inspired by a particular wisdom which will guide us well in this disordered culture.

Immersion in a culture leads to conformity to the culture and ours is one of unbelief and rejection of God.  These two things are turning more and more people, as the news and the articles here on this website depict, toward superstition and various forms of paganism.  For ourselves, we must ensure that all the doors to the diabolical are closed and the weapons of Holy Mother Church are ready at hand at all times.  Then, we must craftily and patiently try to reach our lost brethren before they stray too far to return.

Where do we start?  This Advent, open your heart more deeply and sincerely than you have ever done before.  Yearn for the liberty of the sons of God, for the power from God to soar to the heights of holiness.  Take the advice of exorcists and do the spiritual work necessary to fight well in this battle.

Learn what exorcists see and what we should know.  God bless you.

Slaying Dragons: What Exorcists See & What We Should Know - Amazon
Email Post