Skip to main content
Click Here to buy the bestselling book --- Slaying Dragons: What Exorcists See & What We Should Know
Spanish Edition now available! "Matando Dragones: Lo Que Los Exorcistas Ven y Lo Que Debemos Saber"
The Amazon Audible version now available! Use this link to access it and get your copy!
Be sure to "Subscribe" and "Follow" us!
Posted by Charles D. Fraune December 01, 2019

Visited by a Soul from Purgatory? - A True Story from this Author 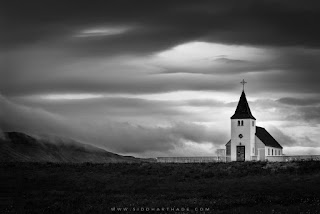 There is a personal story that I am compelled to share which must somehow be connected with the new work I have begun, and with the research and associated spiritual work needed in order to write and publish Slaying Dragons: What Exorcists See & What We Should Know.  If that is actually the case, it would make sense to me.  The story is that, as it seems, Our Lord has permitted me to experience a visit by a soul from Purgatory on this past Solemnity of All Saints.

For those who have already purchased and read the Preface to my book, they will remember that, after my conversion twenty years ago, in those first two years after returning to the Faith, Our Lord gave me many gifts to bring about the necessary healing from my youth (I was twenty years old at my conversion) and to encourage me in my new pursuit of holiness.

One of those gifts was dreams.  This, of course, is not something foreign to the ways in which Our Lord has worked in the past.  Old Testament prophets were given visions in dreams and the ability to interpret the dreams which others experienced.  St. Joseph was given visions in dreams as well, in which Our Lord encouraged him, instructed him, and gave him the graces he needed to fulfill his calling. 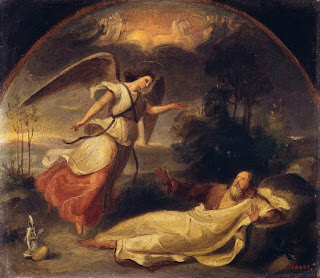 At the very beginning of St. Peter's first sermon, he quoted, as being fulfilled, the words of the prophet Joel, when he stated:


"And in the last days it shall be, God declares, that I will pour out my Spirit upon all flesh, and your sons and your daughters shall prophesy, and your young men shall see visions, and your old men shall dream dreams."

It was this that I experienced, particularly in those early years, but also throughout my life since that moment.  Through these dreams, which Our Lord either gave or permitted me to experience, I received encouragement, graces, and healing of many wounds from my youth.  I do not know whether to credit all of these dreams to the work of the Holy Spirit but, nonetheless, many of them communicated to me a permanent and powerful spiritual impact when endures still to this day.

Given this context, I will now tell the story of what I experienced the morning of All Saints Day, 2019.  I do not claim for certain that this was the visit or communication of a soul in Purgatory, but the facts of this occurrence and the theology of our Faith make it very likely.  I have never had an experience or dream of this sort before.

Before I awoke that morning, I dreamt of visiting my grandmother on my mother's side, who had passed away shortly after my return to the Faith.  In the dream, my wife and children were with me to visit her.  Her home smelled heavily of cigarette smoke as it always had growing up.  In life, my grandmother had never met my wife nor my children.  In the dream, after spending a few days of visiting, my grandmother brought out what appeared to be a fancy cloth of white with fluffy blue trim - a cloth designed to cover a doll house or a doll, I was unsure.  She appeared sad as she presented this gift, though.  I understood this to be because she was not actually able to give this gift to my daughter, even though she desired to do so.

When I first told this story to some of my students, I realized another layer to this part of the story.  My grandmother was not just sad because she was unable to give this gift to her great-granddaughter, but also because, in the dream, she was dead, and she was aware of her death.  She otherwise appeared to me to be alive and well, other than the sadness.  She knew she could not hand this gift over, as she was no longer among the living.  This aspect, combined with the sadness she manifested, caused me to begin to suspect something beyond a random dream.

It was at this point that the dream ended, but not the story I wish to tell.  Immediately upon waking, with these images in my mind, and fully aware that it was the Solemnity of All Saints, I also became aware of an unusual odor in the room.  It smelled like slightly burning bread, like toast left a tad too long in the toaster.  My first thought was that it was the heater, as that had been only the third or fourth cold night as winter approached and our heater sometimes has some odors when it comes on for the first time.  Up until that point, however, we had not noticed any odors.  Further, I have never experienced this smell associated with our heater, as it smelled much different.  It was definitely not toast, as I was the only one awake at the moment, and we rarely make toast with breakfast.

So, I sat there in bed, wondering what this strong burning smell was.  My next thought was the memory that my grandmother was a life-long chain smoker, in whose home the smell of smoke was ever-present, as it was in the dream.  Then, my mind was suddenly flooded with nostalgia:  thoughts of my mother who died many years ago, of my grandmother, of the home where I grew up, and many old childhood memories.  I then began to put it all together:  the dream, the sadness, the Solemnity, the smoke, and that I have never once, as far back as I can recall, had a dream about my grandmother.  Further, in my negligence, I have only very rarely remembered to pray for my grandmother after her death.  She, as a Presbyterian, likely has no one else on earth who would dedicate time to pray for her soul.  As a result, if she was indeed in Purgatory, as would be likely, God providing, she would be in great need of prayers. 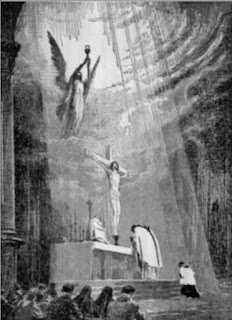 At this point, a great desire to have a Mass offered for her emerged in my mind.  I decided to send a text to a good priest friend of mine.  It was 7:22 am.  He responded within twenty minutes stating that he, on a Solemnity, actual had an open Mass that still had no intention set for it.  That Mass was at 9:00 am.  As a result, my grandmother had a Mass offered for her within two hours of appearing in my dream.  If she indeed was permitted to visit me from Purgatory for that reason, God provided what she needed.

The story doesn't end there.  After this whole event transpired, and the kids were still sleeping in, which never happens, I went to tell my wife what had happened.  (NB: since we have a newborn, who doesn't sleep well, my wife insisted I sleep in the guest room, so one of us could get a good night's rest.)  When I entered our bedroom, with the whole event fresh in my mind, I told her the story.  I then asked, "Did you smell any smoke or anything during the night?  Maybe it was the heater?"  She answered, "I've been awake at every hour during the night, and I have not once smelled smoke until you entered the room."

It was that last statement from my wife that began to drive home the reality that this experience was very likely my grandmother from Purgatory.  I had hoped, and was maybe slightly expecting, that I would have some follow-up dream that would explain what had really taken place.  While I did not have another dream, there was an odd occurrence that seemed to be connected to this event.  My grandmother owned an antique store with my grandfather for many years.  All Saints Day night, the same day as the dream, I had the rare opportunity to watch a movie with my wife.  In it, there was a character, a grandmother, who owned an antique store.  Further, to make it not so randomly coincidental, the antique store in the movie was called "Second Chances."  While not exactly a second chance, Purgatory is a merciful opportunity for a soul to finish what he started in life, and make himself presentable to God.  This coincidence was not lost on me or my wife, who both looked at each other during that scene.

So, I leave this to you, my small audience.  Perhaps it will console you or someone you know.  My grandmother was not a Catholic, but she was a sweet woman who attended a Protestant community occasionally.  She believed in Our Lord to the end of her days; to what depth, I know not.  But she knows, now from Purgatory, who I am and what I would do if Our Lord permitted her to visit me.  All that makes sense to me. 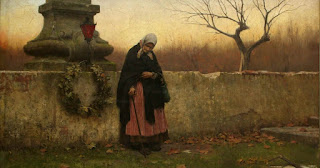 Perhaps one reason to post this story now, in addition to the fact that it took me a while to find the time to type it, is that many of us may be tempted to forget about the Poor Souls now that the month of November has passed and the joy and expectation of Advent has come upon us.  Instead, let us remember them and pray for them always.  They are always in need of our assistance.

Plug for my book, as you would expect:  Slaying Dragons: What Exorcists See & What We Should Know.  This would truly make a great book to give to your loved one for Advent reflections or as a Christmas gift.  Perhaps one of your Protestant friends would enjoy it.  What exorcists see is a matter of fact not opinion, of observation not strict theology.  Perhaps it could be a way to bridge the gap and bring them all home.  May God bless you.
Email Post