Skip to main content
Click Here to buy the bestselling book --- Slaying Dragons: What Exorcists See & What We Should Know
Spanish Edition now available! "Matando Dragones: Lo Que Los Exorcistas Ven y Lo Que Debemos Saber"
The Amazon Audible version now available! Use this link to access it and get your copy!
Be sure to "Subscribe" and "Follow" us!
Posted by Charles D. Fraune February 20, 2020

"I will put enmities between thee and the woman, and thy seed and her seed: she shall crush thy head, and thou shalt lie in wait for her heel."
Genesis 3:15
(DR/Vulgate)

It is here, in this passage, authoritatively interpreted by the Church into whose custody have been given the Sacred Scriptures, that we see the pronouncement of Our Lady's victory over Satan.  She, in union with Her Divine Son, has "crushed the poisonous head of the most cruel serpent," the Devil, who strikes at her Son and all those who follow after Him.  (Ineffabilis Deus, Pius IX, 1854). 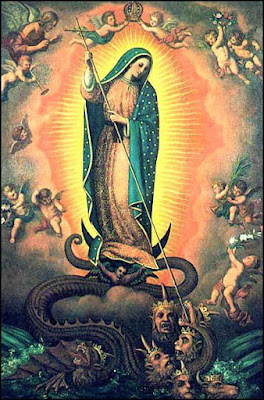 There should then be no surprise that Our Lady's power over evil should be made manifest in the life of the Church in clear and unmistakable ways.  Remember Guadalupe, where Our Lady, through the miraculous image which she created on the tilma of St. Juan Diego, brought to an end the idolatrous practice of human sacrifice among the pagan Aztec civilization and led millions upon millions into the Church of Her Son.

In the lives of countless, if not all, great Saints in the history of the Church, Our Lady has won many victories over the dominion of sin and error, over evil and heresy, routing, through Her children, the work of that ancient enemy of mankind.

Today as well, it is becoming known to the Church, through the work of exorcists, a fuller understanding of the power which Our Lord has granted to His Mother in the work of our salvation.  We are all told in our lives that She is our Mother, that we must pray our rosaries faithfully, and that we must welcome Her, as Our Lord commanded from the Cross, as our own Mother.  Few, it seems, as a result of the overwhelmingly secular world in which we all live today, come to understand how much Our Lord has truly entrusted to Her in order to aid us in our pursuit of salvation.

Providential it is, then, that the work of exorcists is coming into the light, that they might share with the faithful, and with the whole world, the wonders and glories of Our Lady!

Perfect Coercive Power over the Demons

From the teachings of the exorcist, Fr. Chad Ripperger, we learn that Our Lady possesses "perfect coercive power" over the demons.  Exorcists say that at some point in basically every exorcism, Our Lady becomes involved.  Fr. Ripperger himself recalled one powerful manifestation.  As he tells it in this video:

“You can tell something’s going on [inside the possessed person]. Our Lady will appear, they will literally see the abyss open up, they will feel the demon getting ripped out, they will see it going down into the abyss, it closes, and she leaves. She literally doesn’t have to say a thing. That’s how powerful she is.”

Father once invoked Our Lady during a possession and the demon started panicking, saying, “Oh no, oh no! Not Her!”

St. Alphonsus Liguori, one of the great Doctors of the Church, says,

“Mary, then, was this great and valiant woman, who conquered the devil and crushed his head by bringing down his pride, as it was foretold by God Himself: ‘she shall crush his head.’ Saint Bernard remarks, this proud spirit, in spite of himself, was beaten down and trampled under foot by this most Blessed Virgin; so that, as a slave conquered in war, he is forced always to obey the commands of this Queen. ‘Beaten down and trampled under the feet of Mary, he endures a wretched slavery’.” (Glories of Mary)

Through her virtues, Mary obtained a victory over all the evil spirits. As such, St. Alphonsus labels her not only Queen of Heaven but also Queen over hell, a title also used by St. Bernadine of Sienna, among others. One Queenship by exaltation, another by conquest. St. Alphonsus adds that Mary “tames and crushes” the devils, and “snatches” souls from their grasp, presenting them to Her Son.  In an exorcism, a demon once referred to Mary as "thief of souls."

A true devotion to Our Lady will secure us in this spiritual warfare because, if we love her, the demons will fear us all the more. All the demons fell in opposition to one aspect of the plan that God revealed to them at the first moment of their creation. Satan fell because of Our Lady, out of opposition to her role in the plan of the salvation of the human race. All the demons fell in union with Satan so, regardless of what their individual sins were, they hate her because her role and holiness is at the root of their rebellion. Exorcists also say that this hatred of the Blessed Mother is so intense that her prayers are often more powerful than the rite of exorcism itself.

St. Louis de Montfort says that demons have been forced, in exorcisms, contrary to their preference, to admit that “they fear one of her pleadings for a soul more than the prayers of all the saints, and one of her threats more than all their other torments.” A traditional prayer to Our Lady, under the title Our Lady of Perpetual Succour, conveys the sentiments of hope which the power of Our Lady communicates to souls. Within that prayer are the words,


“For, if thou protect me, I fear nothing; not from my sins, because thou wilt obtain for me the pardon of them; nor from the devils, because thou art more powerful than all hell together.”

Our Lady's Power over Evil in Our Lives

In my own life, just after my return to the Faith and when I truly embraced Catholicism for the first time, Our Lord sent many dreams to encourage and inspire me.  Dreams, as we all know, are difficult to discern as to their origin and purpose.  The dream I will now share, from twenty years ago, seems to be quite clearly of supernatural origin.

Having endured a youth characterized by rejection and bullying, I developed a strong hatred toward certain kids with whom I grew up.  As my conversion was becoming more intense, and I had embraced daily Mass, frequent Confession, and frequent Adoration, as well as the rosary for the first time in my life, I knew that this hatred, which I still clung to as the only sort of revenge I could take against those bullies, was a total obstacle to my continued spiritual growth.  Despite this awareness, I felt powerless to do anything about that anger and hatred.

With these thoughts in my mind, I went to sleep one night and had a dream.  In the dream, Our Lady approached me, in an evening setting, in a slightly wooded area, under a street light.  She took me by the hand and led me to a party in a house just down a path from where we met.  Without saying a single word the entire time, She led me into the house and through the crowd of people.  As we passed through the crowd, I looked around and noticed people I knew from my youth.  As we began to head back toward the door to leave, we walked past the one kid for whom I held the most hatred.  I looked him in the eyes, and he looked in mine.  We did not say a word, nor did I feel any particular emotion.  Our Lady did not stop there but kept leading me by the hand toward the exit.  We left the house and walked down the path back to the streetlight.  Here, She let go of my hand and slowly walked away.  Then, I awoke.

Immediately upon waking, with the dream filling my imagination, I noticed a complete purge of all the anger and hatred to which I had clung for so many years.  From that moment forward, I never experienced it again.  As a friend of mine pointed out, that very well could have been not just a psychological fixation but a demon of rage and wrath.

This same friend shared his story of an intense bout with insomnia, which was provoked by some strong anxiety he once experienced.  He had been raised as a devout Catholic but had not yet developed a firm habit of praying the rosary.  During the third night of his insomnia, when it had begun to really take its toll, he had an experience which, to him, was clearly diabolical.  He heard a "voice" of a sort saying, "If you follow me, I will help you sleep."

His immediate impulse was to reject this with the binding prayer, suspicious that the whole ordeal might be linked to this diabolical presence.  Though the binding prayer helped, the insomnia persisted.  At that point, he told Our Lady that he would embrace the practice of the daily rosary if She would help him overcome this anxiety and insomnia.  After one week of praying the rosary every day, the anxiety and insomnia ceased completely.

For many years, he did not understand what had really happened until, as he told me, he listened to the podcast of my interview with The Catholic Talk Show.  As I outline in my book, Slaying Dragons: What Exorcists See & What We Should Know, which was the subject of that podcast, and here in this article, Our Lady is truly powerful against the demons.  This power is not theoretical or for textbooks but is practical and real and living, and is for all Her children.

This article was based on the teachings in my book.  Read more there on the power of grace through the Sacraments, sacramentals, and the intercession of Our Lady and the saints.  This power is real and will give to all, who rely on Our Lord and His Holy Church, the liberation that we all seek but which so few truly find in this life.

Available on Amazon here:  Slaying Dragons: What Exorcists See & What We Should Know 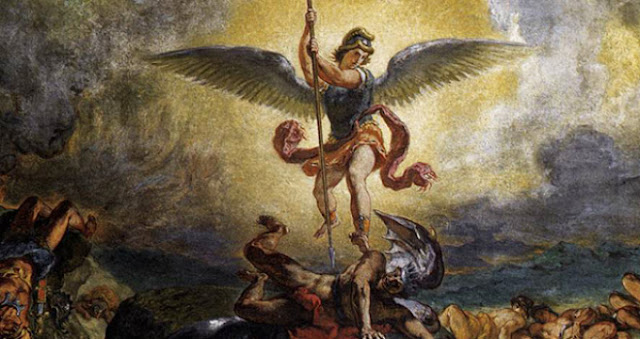