Skip to main content
Click Here to buy the bestselling book --- Slaying Dragons: What Exorcists See & What We Should Know
Spanish Edition now available! "Matando Dragones: Lo Que Los Exorcistas Ven y Lo Que Debemos Saber"
The Amazon Audible version now available! Use this link to access it and get your copy!
Be sure to "Subscribe" and "Follow" us!
Posted by Charles D. Fraune March 21, 2020

God in the Quarantine 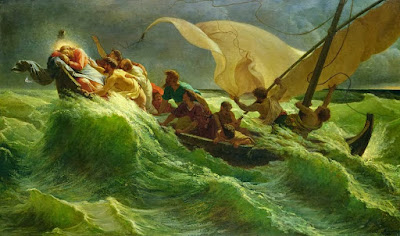 As is evident in the social media posts and ventings and ponderings that appear on a daily basis as everyone hunkers down in some sort of quarantine mode, people are wrestling with the implications of the government reactions to the virus, the international economic downturn, and the potential destabilization of society as we have known it for the past many decades.

In my previous article, "The Devil in the Quarantine," I discussed what the devil is likely up to in our individual lives, tempting us in a carefully crafted manner in the new situations in which we find ourselves.  Some, it seems, desire to give the devil more credit than I did in my article, presenting the virus as the devil's agenda and personal operation, through which he is intent on establishing totalitarian governments, stripping away our rights and shuttering our Churches.

While it is understandable that Satan is rejoicing over many aspects of this world-wide crisis, what some people are not stepping back to consider is what is on God's mind in the midst of this ordeal.

- Was God surprised by the emergence of this virus?
- Was He caught off-guard and now overwhelmed with mourning over the immense suffering that emerged and spread throughout the world?
- Was He powerless against Satan's vicious onslaught against mankind through this carefully crafted virus?
- Is this crisis simply something that God can "fix" or "bring some good out of," but which He did not foresee or intend for us to endure?

The answer to these questions is, of course, "no."

God in the Midst of the Quarantine

What I would like for the reader to consider is the following premise:


God willed this global pandemic and everything that follows from it.

There is nothing that happens in creation that Our Lord has not foreseen and either directly willed or permitted to happen as part of His plan.

Here we see that God makes the choice to permit His creatures to sin, although He does not desire them to do so; and to permit them to enter into a state of suffering, although He desires for them to be happy.  This permitted suffering is not an act of anger against us but is the way He teaches us and our world:  suffering benefits us because it turns us back to Him.

There is nothing more important to Him than securing our eternal salvation and He will stop at nothing to try to bring us back to Him.

From His perspective, the economic security, advanced social interaction, advancements in technology and efficiency, and sophisticated hospitals and health programs that we have created are essentially void of meaning if they do not point us back to Him.

Should He, then, not intervene if we have gone astray?
Should He respect all the work we have done to build a great City of Man and just leave us alone?
Should He change His mind and decide that earthly and natural happiness is, after all, sufficient to bring us to a state of fulfillment?


Should God begin to act, as we have, that He is not that necessary to man after all?

In the age that seeks, or at least claims, to respect the rights of everyone, regardless of who or what they are (or think they are), it is time for us to reflect on whether we are truly respecting the rights of God.


May God be praised!

A Call to Surrender All

So, what reaction does Our Lord want from us in the midst of this virus and quarantine?  He desires that we say to Him, "Speak, Lord, for Your servant is listening;" to say, "My heart is ready, O God, my heart is ready;" to say, "Thank you, Father, for this Cross.  I embrace it and kiss it as having come directly from Your hands;" and to say, "Into Your hands, O Lord, I commend my body, my soul, and all of my possessions."

And to us, what is Our Lord saying?

When we get tired of watching show after show after show, let Our Lord's sweet whisper emerge in the stillness of our boredom and say, "Come to Me, you who labor and are heavy laden, and I will give you rest."  When we realize that the entertainments, which we used to think distracted us from the repetition and exhaustion of our frenetic and chaotic lives, are no longer enjoyable and helpful, let Our Lord's voice emerge in our emptiness, saying, "Take My yoke upon you and learn from Me, for I am meek and humble of heart, and you will find rest for your souls."

A Call to Humility and Trust

As human creatures, our tendency is to grumble in the face of misfortune and suffering.  We react to it because, ultimately, we are proud and want to have control over as many aspects of our existence as possible.  Just look at our world today.

What God is doing now is to reach into the lives of practically every single human person on the planet and shake the foundations they have built for themselves.  He is allowing our economic palaces to collapse, our super-far-reaching socialization to break, our ability to turn to doctors for every pain and discomfort we might experience - to be crippled, and our freedom to enter our Churches to be taken away from us.

He has also forced us to slow down, to return to our families, to realize what is most basic and important in this life, and live in a studied fear of our own mortality.

If death is the final Chapter in the Book which every person ever to live on this planet will have written, then we should be rejoicing that He has given us time to sit down and map out the story that leads up to that permanent and mortal moment.

So, where is God in the Quarantine?  He is even more active than He was before the virus emerged.

Where was God when Our Lord Jesus Christ was being betrayed and handed over to the Romans for execution?
Where was God when Satan unleashed a brutal attack on Job, destroying his entire life and leaving him half-dead and bewildered?
Where was God when the Apostles were on the boat in the midst of a violent storm that was about to drive them to the bottom of the sea?

God is most present to us in the trials and tribulations of this life, for these are willed by Him to purify us and force us to abandon our pride and turn to Him more genuinely.

God permitted the death of His only-begotten Son for, through it, He would obtain for all mankind the possibility of salvation.
God permitted the trial and suffering of Job to teach him, and us, the proper manner in which we must look to God in our trials.

The Lesson From Jesus Asleep in the Storm

When the Apostles woke Our Lord in the boat, when they were stricken with fear at the onslaught of that great storm, Our Lord rebuked the storm indeed, and brought great calm. However, He first rebuked the Apostles for their lack of faith in Him.  It is important to focus on the details of the story.

And they went and woke Him, saying, "Save, Lord, we are perishing."
At this point, He merely opened His eyes and addressed them from His place of slumber saying,

"Why are you afraid, O men of little faith?"
Then He rose and rebuked the winds and the sea; and there was a great calm.

The imagery here is important for us.  The act of waking Our Lord was an act of faith, but the rebuke from Our Lord pertained to their lack of faith in Him even while He slumbered.  There He was, just a few feet away, sleeping as they, in their own minds and by their own judgement, were about to perish.  The panic that they felt as the storm raged and seemed to be on the verge of capsizing their boat, made them believe that Our Lord did not truly care about their well-being.  "Why would Jesus leave us here to perish - does He not care?" they may have thought, which drove them to wake Him from His rest.  Remember again, His first action was not to rise to rebuke the wind and sea but to open His eyes and rebuke the Apostles for their lack of faith.

Their flaw:  Thinking that, in the midst of this terror and the fear of death, He, the all-good God, did not actually care for them - an that it is only when their lives are calm and appear safe that God is truly providing for them.

The storm that sought to capsize the Apostles' boat was a trial willed by Our Lord to test their faith and teach them to trust Him even in the moments of suffering and fear.  As St. Thomas relates from the writings of Pseudo-Origen, in the Catena Aurea:

"Therefore He gave commandment to the winds and the sea,
and from a great storm it became a great calm.
For it behooves Him that is great to do great things;
therefore He who first greatly stirred the depths of the sea,
now again commands a great calm,
that the disciples who had been too much troubled
might have great rejoicing."

In This Fateful Moment

In His infinite wisdom, and in His desire that all mankind, with no exception, become His children and His disciples, Our Lord has stirred the earth to test all men.  As the storm rages, it would seem that He is sleeping.  We, however, know He slumbers not but has the power, when He wills it, to calm the raging storms and bring peace to the world.

That being said, like the Apostles on the boat, we are being tried so that we might learn how to trust the Lord in a more pleasing manner.  Our Lord, in His own life, manifested the will of God for all men:  that through trials and suffering, we may be tested and found worthy of the Kingdom of Heaven, for our Savior and Redeemer has first trod this bitter road and was victorious, unto greatest glory.

Therefore, in this fateful moment, let us pray that every individual on the planet, ourselves included, may make an account of their lives and surrender the totality of them into the hands of God, whose Providence will ensure we navigate to safe harbors and salvation.
+

Brought to you by the author of the best-selling book: Slaying Dragons: What Exorcists See & What We Should Know.  Get the book that faithfully and systematically hands on the teachings of some of the most prominent exorcists in the Church in our times.
Email Post