Skip to main content
Click Here to buy the bestselling book --- Slaying Dragons: What Exorcists See & What We Should Know
Spanish Edition now available! "Matando Dragones: Lo Que Los Exorcistas Ven y Lo Que Debemos Saber"
The Amazon Audible version now available! Use this link to access it and get your copy!
Be sure to "Subscribe" and "Follow" us!
Posted by Charles D. Fraune June 18, 2020

In a recent conversation with a monastic acquaintance, after the announcement of the horrid SCOTUS ruling, whose evil we know not yet in full, I thought I would share here some thoughts on the current moral state of our country. 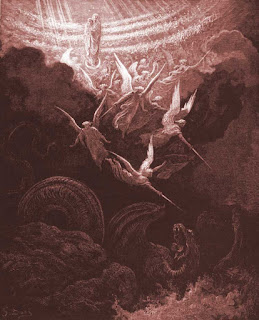 One can wonder about the paradox of Satan's definitive defeat by Our Lord alongside the fact that he is daily achieving immense victories through the destruction of societies, families, and souls.  He does win a victory each time a soul is damned.
Considering the devil's victories over souls, despite his ultimate loss, made me look at the spiritual battle a bit differently.  It seems clear that Satan is inspired by his victories and increases his hunger for the death of souls the more he gets, as God permits.
Indeed, from one perspective, his victories are great and to be feared.
Yes, in a state of grace, fortified by the weapons of the Church and virtue, we have nothing to fear of the devil, but we still lie in danger of the manipulated State and Churchmen, who carry out the devil's work in society.
We are gravely impacted by the ubiquitous spread of institutionalized and marketed evil, which reaches all men, even the youngest, and defiles them.  This evil lurks and hides behind "well-meaning" Christian people as well, such as in many schools, where the souls of the students are supposed to be protected and formed by the Holy Spirit, but are instead manipulated in a deceptive and destructive way, to the extent that those schools have bought into the agenda at large in society.
Indifferent by Conditioning
We very often overlook how Satan gains his victories, and lose the fortitude necessary to oppose him effectively.  As one priest mentioned in a homily, the devil is gaining a victory through abortion, but many do not see it, because they reject the doctrine of Limbo.  While abortion inflicts many lasting wounds, in the lives of individuals, families, and society at large, if the souls of aborted children go straight to Heaven, Satan gains much less than if those souls are sent to Limbo, eternally deprived of the Beatific Vision (though in a natural paradise).
When people fall away from the Faith, or fall into, and remain in, a state of mortal sin, we very often, by conditioning, overlook these grave issues and focus on whatever positive things remain in the person's life.  The reality of mortal sin is that, if it remains on the soul, unrepented, it will take the person to Hell at death.  This is not something to take lightly!
Much Worse before the End
I have always been told and believed that the situation will get much much worse before the End comes.  What part the Triumph of the Immaculate Heart will play, I do not know.  Perhaps it will be only a brief reprieve, and not a long lasting peace?  We have surely set the stage for any and all evils to run wild in our world, so it is difficult to imagine the Triumph setting the whole world on a course back to God, or on a new course that will last very long.
The new morality in the United States resembles that of the Satanists now more than that of the Church.  In an era where the authorities in the land are literally weak-kneed before insolent and disobedient children to such an extent that these rebels can freely take over parts of a high-profile city, and police throughout the land no longer feel safe, or empowered, to do their job, the stage is set for a great rebellion under the guise of another "Great Awakening."
The fact that a Supreme Court Justice, who was supposed to be a defender of truth and goodness, is the one who handed us over to a new evil, fits in perfectly with the current era of compromised fortitude and false wisdom.  Today, the world seems to be run by "closet Satanists," so to speak, who feel they can proclaim, with eloquence and command, their principles of a new humanity made in their own image.
The Catechism states well: "Before Christ's second coming the Church must pass through a final trial that will shake the faith of many believers.  The persecution that accompanies her pilgrimage on earth will unveil the "mystery of iniquity" in the form of a religious deception offering men an apparent solution to their problems at the price of apostasy from the truth.  The supreme religious deception is that of the Antichrist, a pseudo-messianism by which man glorifies himself in place of God and of his Messiah come in the flesh....The Church will enter the glory of the kingdom only through this final Passover, when she will follow her Lord in his death and Resurrection."  (CCC 675, 677) 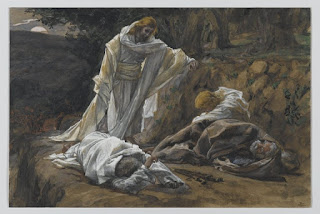 I see this as also showing that the Church will be handed over to destruction by the very world it came to save, just as Our Lord was handed over by His own Apostle, to be killed by the people He came to Shepherd and save.
If the laws continue to swing in favor of evil and immorality and indecency and the restriction of authority, the ones who will enforce these laws could end up being the populace, loosed as they are from the moorings of Truth and Goodness.
I am not an expert on history, but revolutions typically begin with populace uprisings, do they not? And if good laws remain, such as religious liberty, etc., but the duly appointed police authorities are powerless to enforce them and protect the Church...what then?

It is difficult to see exactly what is going on at this fateful moment in human history, but it seems clear that Satan has not lost the strength he was given over 100 years ago.  Or, perhaps, he no longer needs that extra power, for he has formed the world well, and won many disciples to carry out his commands without so much prodding on his part.
Nonetheless, we must not give in to fear.  That being said, we must not be so focused on "being at peace" that we neglect the fact that we are on the verge of something great and terrible.
Be at peace - because you are in communion with God.  At the same time, sharpen your swords and carry them, hand at the hilt, at your side.
Please share!
Get your copy of Slaying Dragons: What Exorcists See & What We Should Know, and learn more about what exorcists say about the tactics and motivations of demons (Chapter One).  Available on Amazon.com, including Audible, and soon to be available in many more stores and retailers across the globe, as well as in Spanish!  Follow on Twitter, Facebook, and subscribe above to get more updates and articles.  God bless you.
Email Post